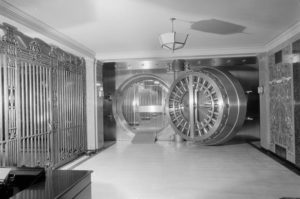 It’s no surprise, as reported in The Wall Street Journal, and discussed in Fortune magazine, that Amazon Web Services (AWS) has been pitching its public cloud services to banks. Amazon has spent the last 4-5 years trying to get security-conscious industries comfortable with the idea of using its shared computing and storage infrastructure.

But are banks new to this game? Not really:

The fact is that many of the largest financial institutions already use AWS at least in test mode, and perhaps more surprisingly, are deploying applications on this shared computing infrastructure running in Amazon data centers. It’s just that they’re not talking about it so much.

That’s starting to change as evidenced by comments J.P. Morgan Chase (JPM, +2.09%) Chief Operating Officer Matt Zames made to the Journal. He said the bank is contemplating the use of Amazon (AMZN, +0.21%) Web Services (AWS) for spiky workloads—say, credit card transactions that take place on Black Friday. Why buy tons of new servers and keep them up to date for workloads that happen once or twice a year?

My bet is that J.P. Morgan Chase is further down the public cloud path than it’s admitting.

Fortune magazine has gotten some enormous companies to admit that they are deploying AWS. According to their reporting, “One of the largest banks in the country has a half a dozen applications running on AWS now but is not ready to talk about that publicly.”

What’s the trigger? Well, beyond the fact that AWS has invested a great deal in the security they tout, it comes down to the quickest path between “A” and “B” in a corporate environment:

An executive at [an unnamed bank] said privately it takes nine months (!) to deploy a new server at the company because of the sign-off required by various departments on different applications. Using Cloud Foundry, a software development and deployment platform running internally, it can set up and deploy a server on Amazon in a day, he said. Cloud Foundry has a layer of policy controls that lets companies automate that painstaking process.

When you combine robust security with ease of deployment, you create a path to the cloud and a phenomenal asset to clients.